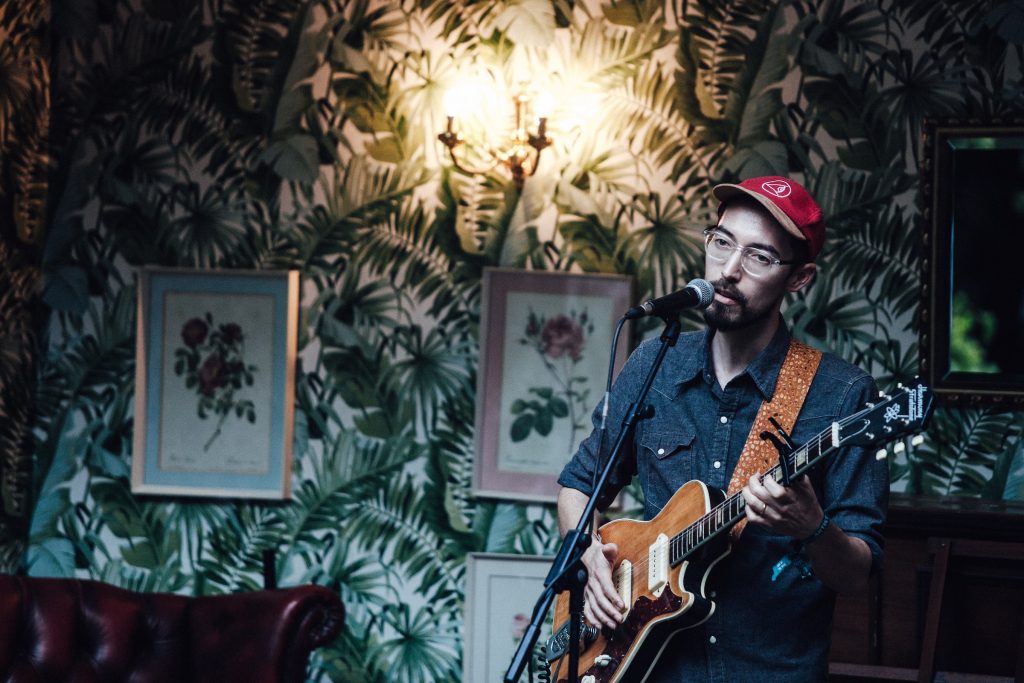 This year one of the selected artists will open one of the Major Stages (Woods, Garden, Big Top) and one will film a session with The Line of Best Fit. Other winners will receive a standard festival slot. If you are chosen as the act to open one of the Major Stages you will still be eligible for The Line of Best Fit feature, (and vice versa) – the two opportunities aren’t mutually exclusive but they won’t necessarily go to the same act.

If you are successful:

With the dust truly settled on this year’s exceptional End Of The Road, it’s time to reveal details of our annual Christmas Party which this year, takes place at Corsica Studios in London on Wednesday 5th December, presented with our friends at Loud And Quiet.

We’re beyond excited to reveal Black Midi, described by Shame as ‘the best band in London’, as our Christmas Party headliners. They join one of this year’s festival highlights Bas Jan, who will be performing their signature art pop, alongside much hyped newcomers Squid, whose “rich blend of psychedelia, Europop and punk noise” (The Line of Best Fit) should get the party started nicely.

Plus Loud And Quiet will be on DJ duties all evening and until late, reliving their career defining set from the festival’s opening party.

Tickets are £13 each and available through Music Glue and DICE.

The dates for next year’s End of the Road festival have been announced for 29 August – 1 September 2019. Early Bird tickets went on sale this morning and sold out in 20 minutes, Tier Two tickets are on sale now for £170 with no booking or transaction fees.

The Deposit Scheme also makes a return – you can pay £45 now and top up the balance in however many instalments you wish, as long as the balance is fully paid by 2nd July.

End Of The Road Festival 2018 is now SOLD OUT! We’d like to extend the hugest thank you to everybody who’s bought a ticket, and we can’t wait to see you in a couple of weeks for another weekend of bands, pints and good times.

If you missed out on tickets, or are looking to shift any spares, head to our official Twickets page at endoftheroad.twickets.co.uk, to buy and sell at face value.

BBC Radio 3’s flagship experimental music programme, Late Junction, returns to End Of The Road festival this year, following the partnership’s successful debut in 2017, curating a range of ground breaking and exciting artists from around the globe. Once again, four carefully selected artists will perform on the Tipi Stage as part of the festival’s Friday night line up, hosted by Verity Sharp.

Moor Mother is the experimental music project of musician, poet and visual artist, Camae Ayewa. With ecstatic acclaim for her debut album Fetish Bones — named one of the albums of the year by the likes of Pitchfork, Rolling Stone, and The Wire — Moor Mother uses hip-hop, samples, spoken word and free jazz to create space-time bending sound, resulting in a DIY twist on the Afrofuturism of fellow Philadelphia artist-philosopher Sun Ra.

Ten piece psychedelic Sudanese Afrobeat ensemble The Scorpios first arrived in the UK in the 1980s as refugees and now consist of members from all over the world supported by an international backing band of musicians from Ghana, Jamaica, Poland and Japan. Influenced by traditional Sudanese songs and 1960s pop, their unique blend of Eastern funk, Arabic rhythms and reggae makes for an exhilarating live show.

Zimpel / Ziolek is the coming together of two leading multi-instrumentalists from Poland’s fertile experimental underground. Fusing the modern jazz minimalism of Waclaw Zimpel with Kuba Ziolek’s traditional folk leanings, the duo’s extraordinary record What Goes Around is a masterclass in musicianship, filled with astounding clarinet solos and hypnotic guitar work. End Of The Road is thrilled to host Zimpel / Ziolek’s UK festival debut.

Recordings of all performances will be broadcast on BBC Radio 3’s Late Junction on the 11th, 12th and 13th September from 11pm.

Sharpies at the ready… our 2018 Stage Times are here! This year the official clashfinder will be available as a handy pull out in our actual festival programme, available on-site. So no more printing and laminating your own, only to lose it on the first night.

We’re delighted to reveal details of our Cinema programme for 2018, tailor made for cinephiles, film fanatics and those who believe the only true hangover cure is watching Tom Hanks in Big.

We’re very excited to welcome The Prince Charles Cinema and their wide selection of cult classics to Larmer Tree for the first time. They curate Saturday and Sunday’s billing, with Heathers, The Princess Bride (Quote Along) and a Wallace and Gromit double bill, followed by a Q&A with Senior Aardman Model Maker Jim Parkyn, just a few of many highlights.

Meanwhile, all four of Thursday night’s films have been hand-picked by mercurial pop genius Gruff Rhys, ahead of his Saturday night performance on the Woods Stage, including Jean Luc-Godard’s La Chinoise, whilst we’ve taken the reins on Friday’s offerings.

We’re delighted to welcome some exciting new food faces this year, including the award winning Lebanese food and Antipodean coffee connoisseurs Wholefood Cafe, Thai street food specialists Bangwok and from the people behind The Breakfast Club comes The Little Green Trailer, offering hangover busting breakfasts to make you feel like a champion after a night lost in the Woods. There will also be lots of familiar faces too, with the enduringly popular Rac Shac bringing their signature giant wheels of Raclette cheese, the tantalising breakfast kedgeree from The Goan Seafood Company and deliciously addictive and healthy Happy Maki who make innovative vegan sushi rolls to order.

One of End Of the Road’s corner stones Pizza Tabun are sadly not coming to the festival this year. But fear not as we have invited another award winning pizzeria to join us, Made Of Dough, who serve the most delicious Neapolitan-style sourdough base concoctions we’ve ever tried.

We’re also proud to host Beavertown Brewery for the third year running at End Of The Road this year, with all their sublime beer and ill behaviour. The Beaver Bar will return with the craft beers you know and love, with Gamma Ray, 8 Ball, Smog Rocket and festival favourite Lupuloid all making appearances, as well as Neck Oil available on draft at The Black Crow bar for the first time. And we’ve heard there will be some surprises in store as well… so keep your eyes peeled. If you can keep them open.

In addition to the Beaver Bar, we’ve got lots of real ales returning the Bear Tavern as usual. We’re very lucky to have some of the country’s best real ale breweries located close to the festival and for the fourth year, we’ll be sourcing our real ale from local breweries. Real ales from Somerset, Wiltshire, Dorset, Hampshire and the New Forest covering a wide selection of styles, colours and flavours will be available to tickle your tastebuds throughout the weekend. The Black Crow and Peacock Bars will be serving the annual End Of The Road Ale, made differently each year by Milk Street Brewery, while The Badger Innis the place for early morning Bloody Marys, late night cocktails and a single malt and gin menu. Last but definitely not least, the infamous Cider Bus will be back with a bang, keeping the party going into the small hours.