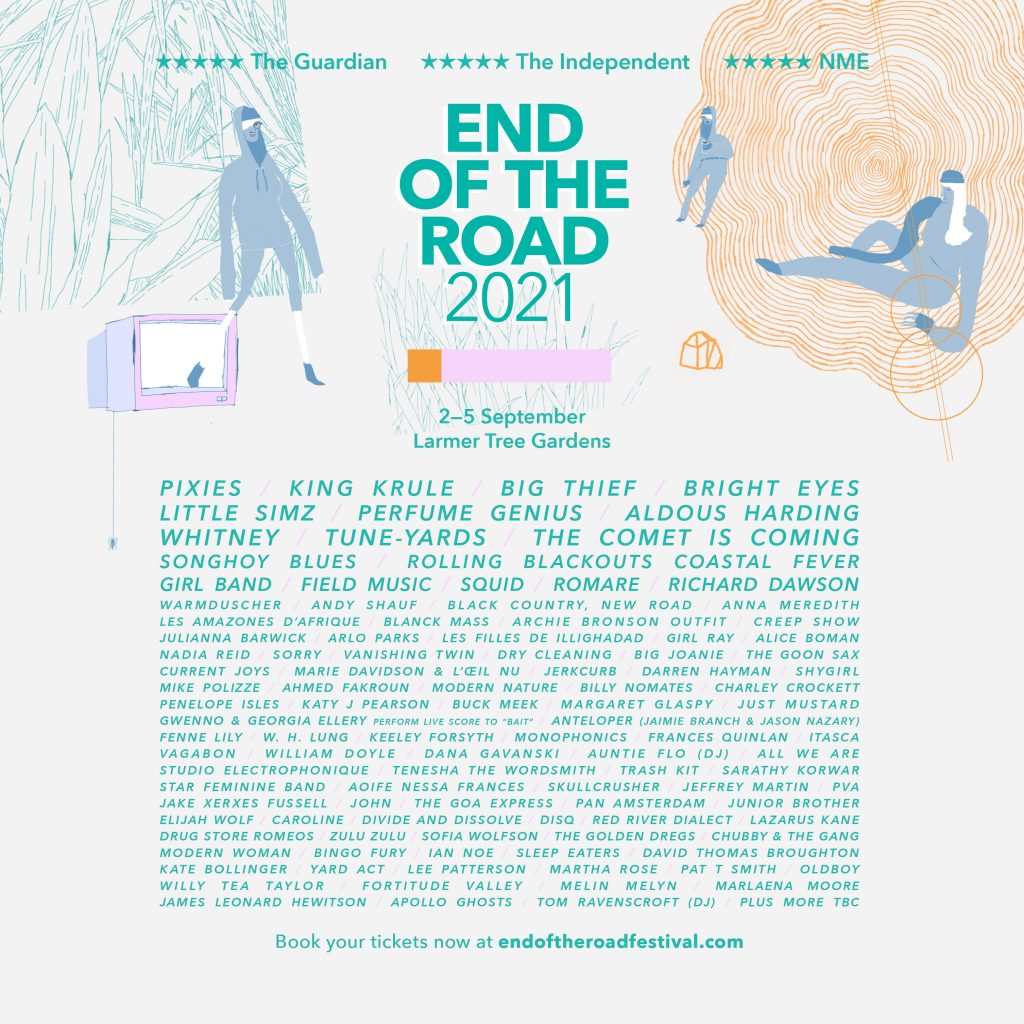 To spread some cheer before the end of a very difficult year, we are thrilled to reveal who will be joining Pixies, King Krule, Big Thief, Bright Eyes, Little Simz and Aldous Harding at End of the Road 2021. Feast your eyes on over 100 artists on the bill, some familiar from 2020, some not so much…

We were ready for one hell of a party in 2020 so we did our best to keep most of the original line-up. The first of which needs no (re)introduction – it is an honour to once again welcome masters of loud-quiet-loud Pixies; King Krule with his endlessly inventive sounds and, having made quite an impact with their transcendental Garden Stage set in 2018, Big Thief are back, this time to top the bill.

Bright Eyes will appear at End of the Road for the very first time in 2021. Hearing songs from the band who made some of the 00’s defining songs – along with some new ones –  in the stunning surroundings of Larmer Tree Gardens will be truly unforgettable. The incomparable New Zealand songwriter Aldous Harding has also confirmed her return. UK rap pioneer Little Simz leads the charge of this year’s talented wordsmiths, drawing from jazz, funk and punk to soundtrack her dexterous flow.

But you knew this already…

New for 2021, the peerless Perfume Genius returns, this time to headline the Woods Stage on Thursday night. His cinematic new album Set My Heart On Fire Immediately has given us immeasurable amounts of joy this year. Rolling Blackouts Coastal Fever also make a return. The Aussie five-piece are set to rip up the fields of Dorset again with ridiculously catchy guitar pop.

From the other side of the Atlantic, we have Anteloper; a duo of psychedelic sonic compatriots forged in the Chicago jazz scene and perfected in Brooklyn by trumpeter Jaimie Branch and drummer Jason Nazary. From the West Coast, tUnE-yArDs bring an enviable array of percussion instruments, strong soulful vocals and endless loops

Continuing End Of The Road’s explorations into the experimental we have Brooklyn based composer Julianna Barwick crafting ethereal, largely wordless soundscapes, all of which are built around multiple loops and layers of her angelic voice.

Joining the genre wandering desert blues band Songhoy Blues from Mali, will be the creative force that is Les Amazones d’Afrique plus the groundbreaking Les Filles de Illighadad, whose lead vocalist Fatou Seidi Ghali is one of the only Tuareg female guitarists in Niger. All female seven piece Star Feminine Band hail from Benin and play a lucky dip of cross-African styles, highlife perhaps the most prominent, with pop energy and rock sinew. Oh and they have three drummers.

And finally, it wouldn’t be End of the Road without Squid in attendance. They were the talk of the weekend in 2019, playing a whopping three sets, as well as the stars of In The Garden of Streaming in September. They, and all of you, were missed terribly this year. But we hope to come back bigger and stronger in 2021 with more music, twists, turns and surprises than ever before.

The Comet Is Coming