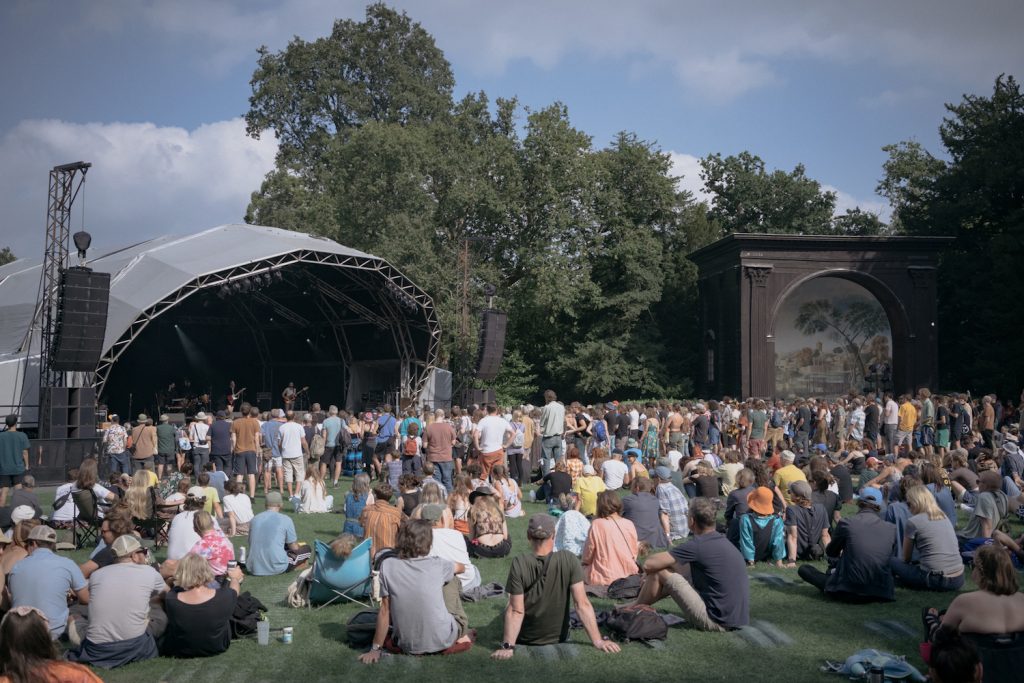 We are now accepting applications for our annual Play EOTR competition, in which we handpick and invite our favourite new artists to play at End Of The Road. We are only picking 2 acts this year as we are honouring previous winners bookings from 2020.

Head here for more info and to apply.

We’re delighted to announce the return of our famous Christmas Party, taking place at Studio 9294 in London on Thursday December 9th! Joining us for festive fun will be the sublime Wu-Lu, who blew so many of you away at End Of The Road 2021, and a world exclusive performance from Christmas Creedence Revival; a tribute to everyone’s favourite Americana jam band, formed of local indie darlings.

As if that weren’t enough, we’ll also have stand-up comedy from the magnificent Rob Auton, Loud and Quiet Magazine DJs and one more live act to be announced very soon.

We’re absolutely delighted to welcome the legendary Pixies as our first End Of The Road Festival 2022 headliner. The pioneers of loud-quiet-loud, and one of the most influential guitar bands of the past forty years, they’ll bring their visceral, thrilling live show to Larmer Tree Gardens for the first time next September. With 2022 early-birds selling out in under a minute, tickets are still flying out the door at record speed, so secure yours before it’s too late.

It’s what you’ve all been waiting for. We’re delighted to share our EOTR 2021 Day Splits with you all today. Time to dig out the sharpie and spend the next fortnight fretting over clashes… we hope they’re not too evil.

In addition to the above, we’re thrilled to announce that ever-growing folk collective Broadside Hacks will perform a very special Sunday afternoon set on our Piano Stage.

We’re sorry to say that Altin Gun, The Goon Sax and Tenesha the Wordsmith will no longer be joining us; though we’re delighted to welcome Soccer96, Pozi, Charlie Cunningham, Teleman, NiNE8 and Blood Wizard to the bill.

With just over two weeks to go before the 15th edition of End Of The Road, described as “inarguably, the best-curated festival of the summer” (★★★★★ NME in 2019), the music offering is already looking like the best and most cutting edge of the summer so far, featuring artists like King Krule, Stereolab and Special Guest Damon Albarn. In addition to this, the
festival has now released an incredibly strong lineup for their Comedy & Literature offering. Simon Amstell makes a welcome return to stand-up and will be headlining the festival’s comedy programme with a set that promises to tackle big themes such as shame and ego. A familiar presence on TV and Radio over the last decade Shaparak Khorsand also joins the bill,
bringing laughs about “ladette” culture in the 90s. Spain’s best export… to Wales, Ignacio Lopez, will give us a taste of being an outsider, as Tom Ward will keep the energy high and Irish comedian Mary Bourke refuses to hold her punches whether exploring gender equality on national identity.

Elsewhere, Jon Levene, usually of Jon & Nath, will be flying solo, whilst BBC Radio 4 regular and highly acclaimed comedian Josie Long will perform and extended solo set. David Hoare will bring his musical comedy to the festival, Dutch comedian Micky Overman will provide her usual sharp writing with a frank and confident delivery and absurd trio Crybabies will entertain with their narrative-driven sketch comedy.

On the literature side, End Of The Road Festival will help you get back to nature with talks from celebrated Author and former Music Critic Lucy Jones, and fellow novelist and naturalist Melissa Harrison. Journalist and Author Sophie Heawood is sure to bring some laughs as she talks about the celebrities she writes about and her own, endearingly chaotic, personal life.
Human Rights Activist and Author Rebecca Schiller will educate, as Historian and Biographer Philip Hoare will be sure to take his audience on a journey through time.

With less than a month to go until EOTR 2021, we have made some late additions to our lineup to ensure this year goes down as our best ever. Leading this news announcement as Special Guest is Damon Albarn who, with a new solo album on the horizon, will be accompanied by his band with a string quartet and you can expect a mix of new material and songs from across his songbook. Also joining us will be Canadian post-punk provocateurs Crack Cloud, Birmingham based R&B star Sipho, sixteen-piece West-African outfit Balimaya Project, boundary pushing electronic musician Loraine James, confessional singer songwriter Anna B Savage and plenty more.

We come bearing good news! A limited number of End of The Road 2021 tickets go on sale tomorrow (20th May) at 10am!

Click here and grab your tickets for this year’s festival before they’re all gone. Be quick to avoid disappointment.

And in case you need a reminder of what’s in store for our 15th anniversary, read on…

So much has changed since the last time we sang, danced and frolicked amongst the trees, the peacocks and our favourite bands, but one thing that hasn’t is our determination to throw the party of the year.

We worked really hard to bring you our 2020 line-up in 2021, but the world had other ideas and some of our pals from across the pond are no longer able to make it.

Determined to bring you the best party this summer, we rolled up our sleeves and got to work curating an exciting new line-up. Feast your eyes on our new additions for 2021 and already familiar names.

We know this is a big change from our original line-up but we’re sure you’ll be ready to party with us in September anyway. In case you’re not, we’ve decided to open up refunds for a strictly limited 10-day window. Many of you supported us by rolling over your tickets from 2020, for which we’re truly grateful, and loads of people are still hoping to buy tickets, so although we have the right to substitute acts under the T&Cs of ticket purchase, in these special circumstances if anyone wants out you’ve got until midnight on the 14th May to request your refund.

For those of you who were caught unaware by the early March sell out, some more exciting news comes in the form of a Limited Late Release of Tickets. You will have your chance to grab a ticket for this year’s End Of The Road on May 20th from 10am. Tickets have been in high demand, so set aside whatever else you were planning to do that day to make sure you’re one of the lucky few.

We missed you all terribly last year, but we are coming back bigger and stronger in 2021 with more music, twists, turns and surprises than ever before.

SEE THE FULL LINE UP HERE.

As the temperatures rise and the sun hangs around beyond 5pm, we’re feeling positive about the Summer and making real plans! It seems you lot are too because End of the Road 2021 is now SOLD OUT!

It has been a strange year and we’d like to extend the biggest THANK YOU to everybody who’s bought a ticket and stood with us through these tough times. We can’t wait to see you in September for a well deserved weekend of incredible LIVE music, pints with pals and a whole lot of dancing!

If you missed out on tickets, official resales will once again be available via Twickets only. Keep an eye out for more details and onsale dates.

Don’t forget – if you have bought a Deposit ticket you have until 5th May to pay the remaining balance.

To spread some cheer before the end of a very difficult year, we are thrilled to reveal who will be joining Pixies, King Krule, Big Thief, Bright Eyes, Little Simz and Aldous Harding at End of the Road 2021. Feast your eyes on over 100 artists on the bill, some familiar from 2020, some not so much…

We were ready for one hell of a party in 2020 so we did our best to keep most of the original line-up. The first of which needs no (re)introduction – it is an honour to once again welcome masters of loud-quiet-loud Pixies; King Krule with his endlessly inventive sounds and, having made quite an impact with their transcendental Garden Stage set in 2018, Big Thief are back, this time to top the bill.

Bright Eyes will appear at End of the Road for the very first time in 2021. Hearing songs from the band who made some of the 00’s defining songs – along with some new ones –  in the stunning surroundings of Larmer Tree Gardens will be truly unforgettable. The incomparable New Zealand songwriter Aldous Harding has also confirmed her return. UK rap pioneer Little Simz leads the charge of this year’s talented wordsmiths, drawing from jazz, funk and punk to soundtrack her dexterous flow.

But you knew this already…

New for 2021, the peerless Perfume Genius returns, this time to headline the Woods Stage on Thursday night. His cinematic new album Set My Heart On Fire Immediately has given us immeasurable amounts of joy this year. Rolling Blackouts Coastal Fever also make a return. The Aussie five-piece are set to rip up the fields of Dorset again with ridiculously catchy guitar pop.

From the other side of the Atlantic, we have Anteloper; a duo of psychedelic sonic compatriots forged in the Chicago jazz scene and perfected in Brooklyn by trumpeter Jaimie Branch and drummer Jason Nazary. From the West Coast, tUnE-yArDs bring an enviable array of percussion instruments, strong soulful vocals and endless loops

Continuing End Of The Road’s explorations into the experimental we have Brooklyn based composer Julianna Barwick crafting ethereal, largely wordless soundscapes, all of which are built around multiple loops and layers of her angelic voice.

Joining the genre wandering desert blues band Songhoy Blues from Mali, will be the creative force that is Les Amazones d’Afrique plus the groundbreaking Les Filles de Illighadad, whose lead vocalist Fatou Seidi Ghali is one of the only Tuareg female guitarists in Niger. All female seven piece Star Feminine Band hail from Benin and play a lucky dip of cross-African styles, highlife perhaps the most prominent, with pop energy and rock sinew. Oh and they have three drummers.

And finally, it wouldn’t be End of the Road without Squid in attendance. They were the talk of the weekend in 2019, playing a whopping three sets, as well as the stars of In The Garden of Streaming in September. They, and all of you, were missed terribly this year. But we hope to come back bigger and stronger in 2021 with more music, twists, turns and surprises than ever before.

The Comet Is Coming