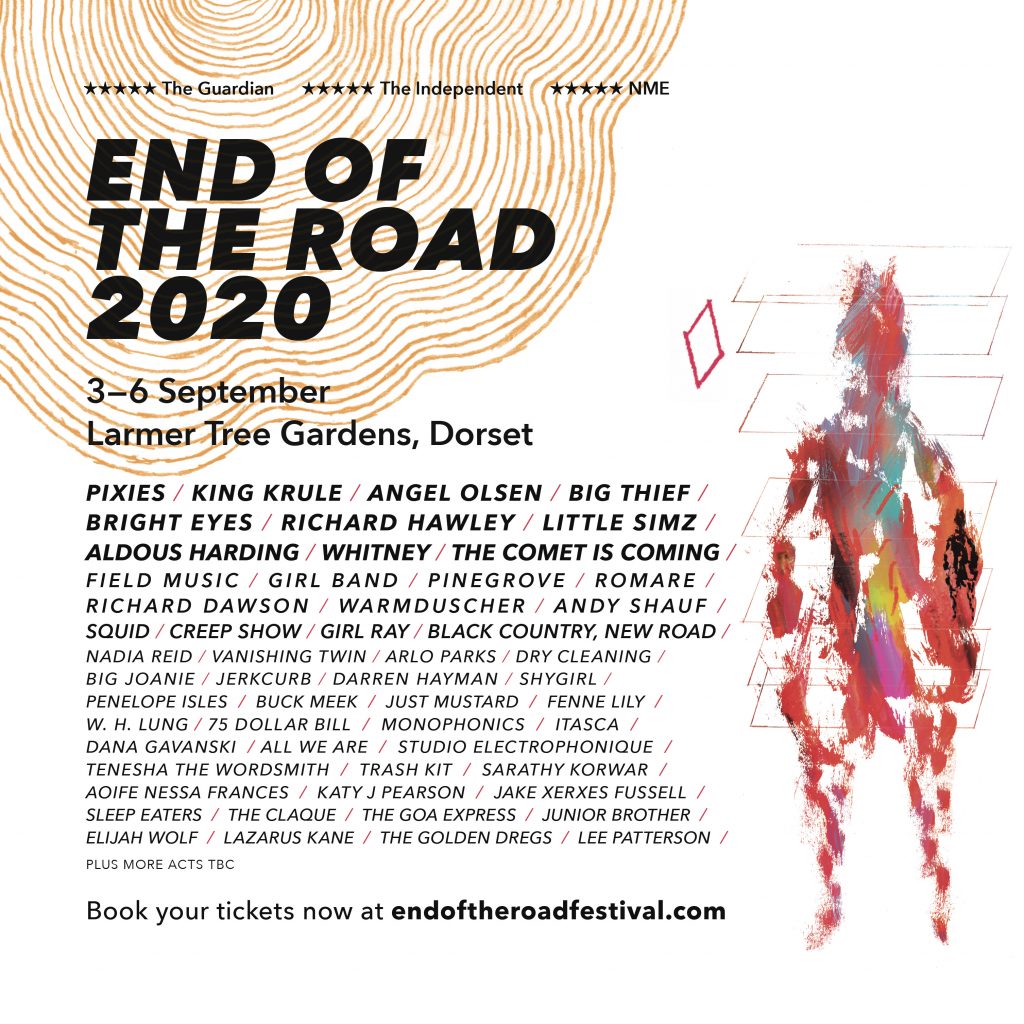 It seems like it was only yesterday that we were packing up our tents after 2019’s magical End of the Road. It was quite a year: the NME said it was “inarguably, the best-curated festival of the summer”, BBC 6 Music Drivetime listeners voted it ‘Best Festival’ and Michael Kiwanuka’s breathtaking performance earned him a Q Award… Now we’re back in business with another phenomenal set of headliners, along with many more outstanding bands and performers. So, without further ado…

First up, it’s the band Kurt Cobain said he stole his riffs from and the ones who made loud-quiet-loud into an art form … It’s an honour to welcome Pixies to Dorset for their End of the Road debut. From festival headlining veterans to one topping the bill for the first time, true cult original King Krule will bring his endlessly inventive music to the Woods Stage, as will the singular Angel Olsen – who returns to Larmer Tree Gardens having left audiences awestruck by the sheer range of her voice back in 2013. After their transcendental Garden Stage performance two years – and two incredible albums – ago, Brooklyn folk-rock four-piece Big Thief make their return, this time on the biggest stage.

After a nearly ten year hiatus, we still can’t quite believe that Bright Eyes will be performing at End of the Road for the first time in 2020. Hearing songs old and new from the band who made some of the 00’s defining records will be truly unforgettable in the stunning surroundings of Larmer Tree Gardens.

Incomparable New Zealand songwriter Aldous Harding makes her third appearance with her delicate but danceable tunes, whilst End of the Road royalty Richard Hawley returns 12 years after having first performed way back in 2008.

UK rap pioneer Little Simz leads the charge of this year’s talented wordsmiths, alongside one of the underground’s most in-demand artists, Shygirl and 19-year-old London poet Arlo Parks. Bay Area spoken word artist and musician Tenesha The Wordsmith puts her deft and sharp words against a backdrop of leftfield electronica, soul, hip-hop, and jazz, whilst dazzlingly talented The Comet Is Coming bring their “apocalyptic space-funk” to End of the Road for the first time. The buzz around Black Country, New Road at last year’s festival was so intense that we decided to have them play again this year.

Continuing End Of The Road’s explorations into the experimental we have the Electronic-folk supergroup Creep Show. Join the legend that is John Grant, along with his friends Stephen Mallinder from Cabaret Voltaire, Tunng’s Phil Winter and sometime John Foxx foil Benge, as they delve into the world of dark analogue electro. New York duo 75 Dollar Bill — whose 2019 double album I Was Real topped Wire Magazine’s albums of the year — will be exploring new terrain that blurs traditional and modern music genres, whilst pioneering UK trio Trash Kit will bring their own exhilarating post-punk from across their three thrilling albums.

And finally, it wouldn’t be End of the Road without its now signature set of raucous guitar acts. Crowned kings of riffs Pixies will be in excellent company with Dublin four-piece Girl Band, fellow Irelanders Just Mustard, South London post-punkers Dry Cleaning, and festival sweethearts Squid.

The Comet is Coming

Plus more acts to be announced…