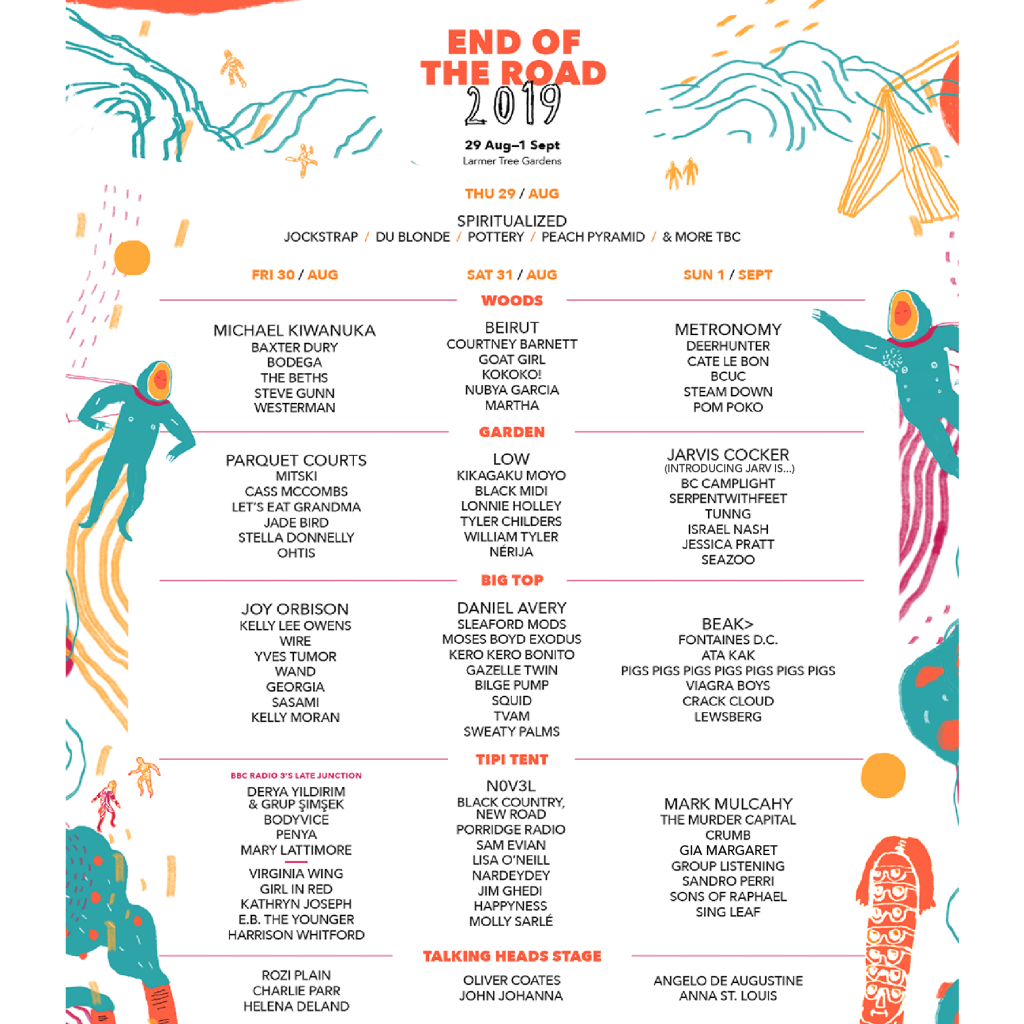 We are very excited to reveal the 2019 Day Splits along with extra additions to this year’s lineup. We’re also thrilled that BBC Radio 3’s Late Junction will be returning to the Tipi Stage on Friday night, curating another evening of experimental and eclectic music from around the globe.

The audacious and uncompromising Spiritualized will kick things off into the stratosphere on Thursday, whilst End Of The Road first-timer Michael Kiwanuka takes the reins for his first ever UK festival headline show on Friday. He tops a faultless supporting cast including Baxter Dury, The Beths, Parquet Courts and Mitski as well as daring techno producer Joy Orbison, electronic music powerhouse Kelly Lee Owens and avant-garde producer and performer Yves Tumour.

Metronomy will bring the Woods Stage to a close on Sunday, with strong support from Deerhunter and Cate Le Bon, and the Garden Stage is closed by longtime friend of End Of The Road and national treasure Jarvis Cocker, who will be appearing as his latest, mysterious musical creation JARV IS…. In the Big Top, guitar fans won’t be disappointed with a punk hat trick including Fontaines DC, Pigs, Pigs, Pigs, Pigs, Pigs, Pigs, Pigs and Viagra Boys.

The Comedy Stage has evolved into the Talking Heads Stage – a multi-arts space, with a re-invented programme where you can sit back, relax, and enjoy your usual stellar comedy line-up, as well as exceptional music including Angelo de Augustine, Charlie Parr and Rozi Plain, plus talks, surprise shows and much more.

In addition to all of this, throughout the four days, there will be the usual array of surprise performances, one-off collaborations and artist Q&As – presented in collaboration with The Line of Best Fit. There will be a variety of after-hours fun and dancing to be had plus Loud & Quiet’s Silent Disco opening party on Thursday night at the Tipi Stage.