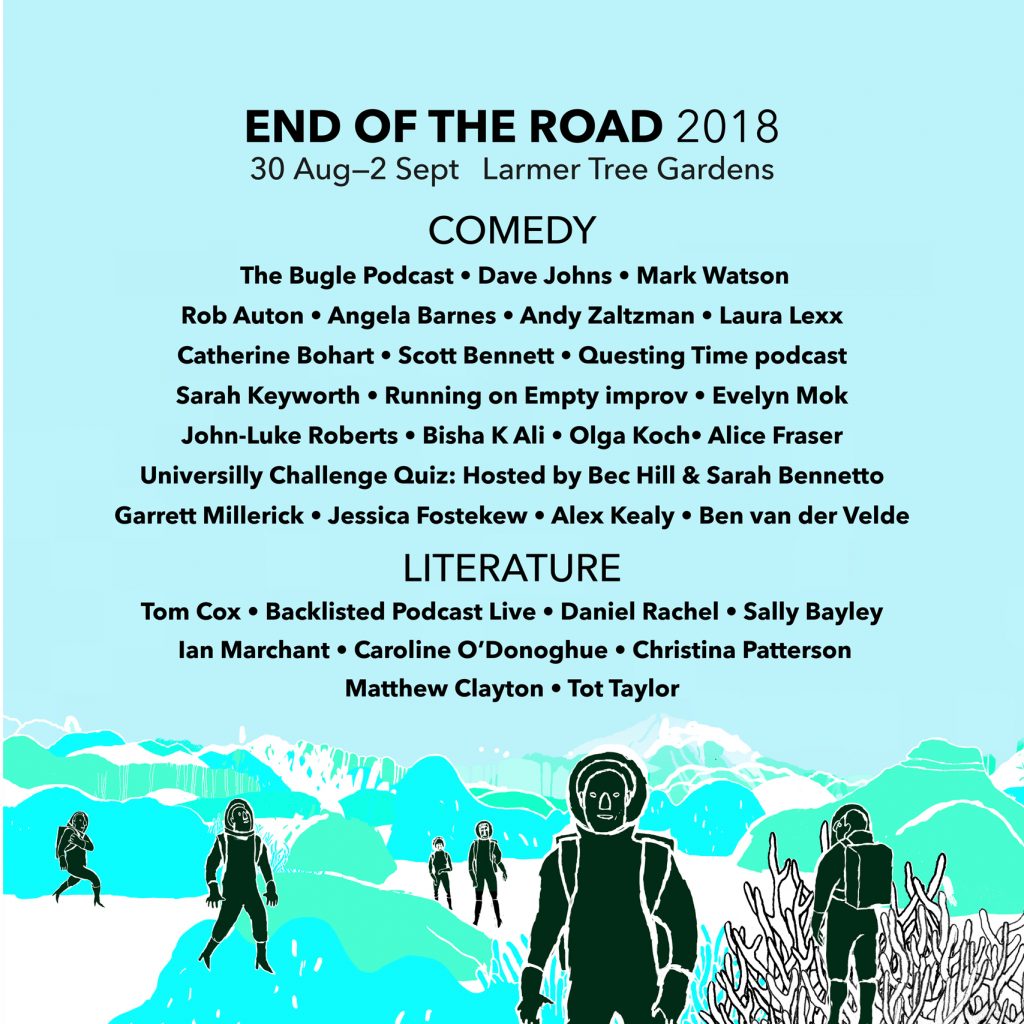 This year’s Comedy Stage boasts a strong line-up with the usual blend of stand up, sketch, character, podcasts and political satire. First up, we are  thrilled to welcome influential and satirical podcast The Bugle to End of The Road for the first time, where they’ll be recording live. The show created by Andy Zaltzman – also performing on the Comedy Stage this year and an EOTR favourite – and John Oliver, continues to broadcast with Andy and a host of international co-presenters. Joining him at the festival is comedian and frequent co-host, Alice Fraser, also performing a solo set this year, as well as a special guest to be announced.

Next, we have Bafta Award winning Dave Johns. Instantly recognisable from his lead role in Ken Loach’s critically acclaimed I, Daniel Blake, Johns has been performing stand-up for three decades and has honed his talents as a poignant and warm performer, a skilled storyteller and a natural joke-teller. Our special late-night headline show comes from panel show regular and sometime Tim Key collaborator, Mark Watson. Cluster-bombed with yoghurt on TV’s Taskmaster, half-killed on The Island, Watson returns to the calmer surrounds of the Larmer Tree Gardens to perform his most recent full-length Edinburgh Fringe offering, The Infinite Show.

We are also delighted to reveal another fantastic literature line up, showcasing some of the most acclaimed, fascinating and moving writers around. As usual, during the morning of each day of the festival, a selection of authors will read from and discuss their work alongside more workshops than ever before, at The Library Stage in The Outlands. The hugely popular and influential Blacklisted Podcast, who will be recording an episode live at the festival. Hosted by John Mitchinson (QI) and Andy Miller, it  has been garnering fans across the globe and they’ve promised a very special guest will be joining them too… Not to be missed.

Best selling author and ex Guardian music critic Tom Cox may be more known for his hilarious but poignant twitter account My Cat Is Sad, following lamentations of his cat The Bear, but he will be discussing his latest book at End of The Road. In 21st-Century Yokel he explores the way we are tied inescapably to landscape, whether we like it or not.

For the music writing lovers, Daniel Rachel’s critically acclaimed book Walls Come Tumbling Down: The Music and Politics of Rock Against Racism, 2 Tone and Red Wedge charts the pivotal period between 1976 and 1992 that saw politics and pop music come together for the first time in Britain’s musical history, while Tot Taylor takes us back further to question where songs actually come from and whether all songs are in fact just the ‘same song’.

Revered new author Caroline O’Donoghue brings her critically acclaimed debut novel Promising Young Women, a striking, gothic and witty story about being a young woman in a man’s world. Last but not least, writer, broadcaster and columnist Christina Patterson will help us hold it together after a long night at the Disco Ship with her new book The Art of Not Falling Apart. A joyous, moving and sometimes shockingly honest celebration of life as an adventure, one where you ditch your expectations, raise a glass and prepare for a rocky ride. Cheers to that.