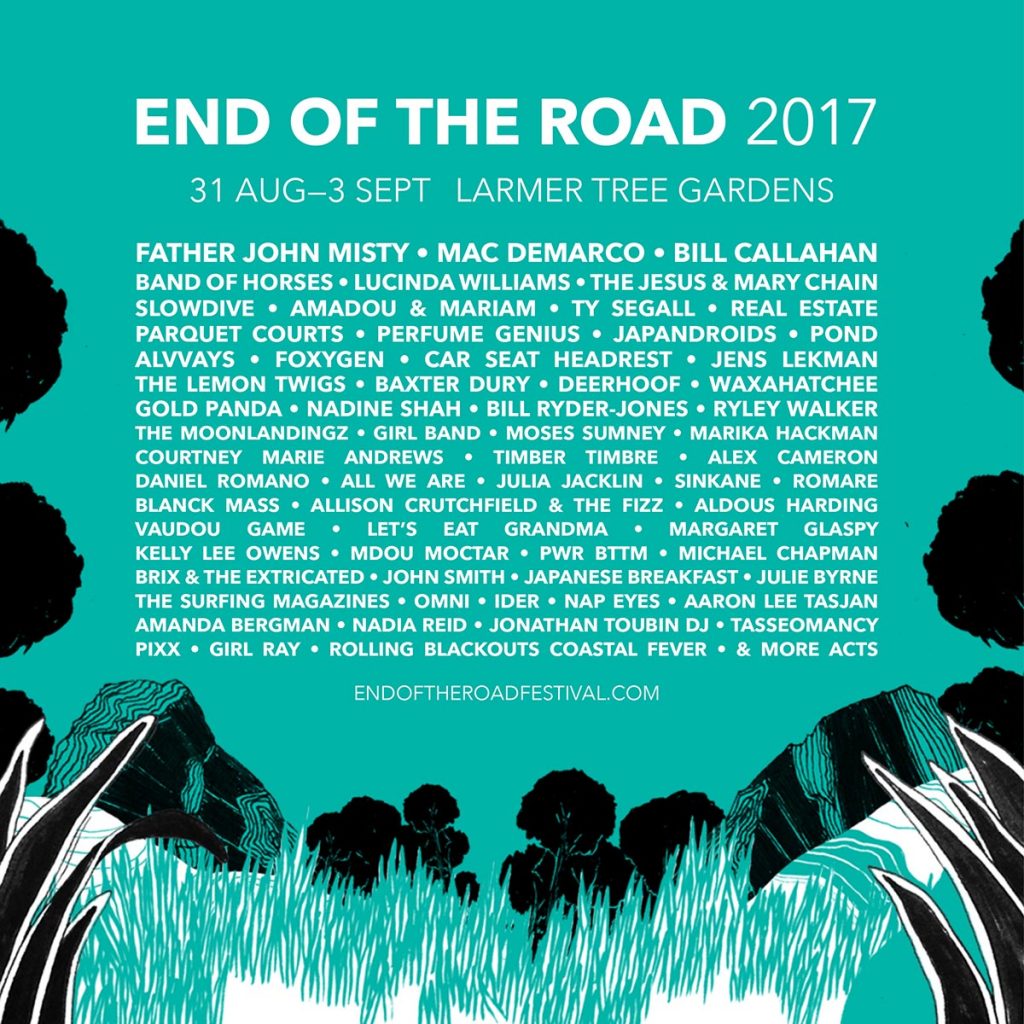 Bill Callahan has been revealed as the third headliner for End of The Road 2017. The seminal and singular songwriter will play his only UK festival this year and his first ever performance at End of The Road. The man formerly known as Smog, whose recent exceptional album Dream River was one of 2013’s finest, is one of America’s defining voices. We expect to be quietly devastated by his laconic and powerful songs when we hear them live in the magical setting of Larmer Tree Gardens this September.

We are also thrilled to announce shoegaze legends Slowdive –  whose first album in 22 years is due out in May – will be joining us to headline the Big Top on Thursday night. They will be joined on Thursday by The Moonlandingz – a fictional band with a story as entertaining as their music, who have now become a reality thanks to two members of Fat White Family.  They describe themselves a “cosmic synth krautabilly group doing fuzzy Joe Meek-style pop” – but playing live they become even more rock’n’roll with singer Lias Saoudi, aka Johnny Rocket, a fantastically acerbic front man perpetually on the verge of either collapse or combustion.

We like to keep things in the family at End of The Road, so this year we not only have the critically lauded Waxahatchee, AKA Katie Crutchfield, unofficial leader of the DIY indie punk scene and purveyor of voice-of-a-generation songwriting, we also welcome her supremely talented sister Allison Crutchfield. Both are renowned for their captivating live shows so we’re very excited to have them both at this year’s festival for the first time, and fingers crossed for a live PS Eliot reunion… We can dream!

Also joining us for the first time we have the sublime Moses Sumney. We’ve been a long time fan since his star turn on Beck’s Song Reader – his version of ‘Title Of This Song’ was a standout among many established artists who contributed, his voice being one of those remarkable instruments; rich gorgeous and effortless.

Psychedelic explorers Pond will be making a very welcome return to Larmer Tree Gardens, following their standout set in 2015. With their highly anticipated new album The Weather due in May, we can’t wait to see what they have in store this time around. Hopping across the ocean to neighbouring New Zealand, we have the  bewitching talent of 4AD signed Aldous Harding, her bleak and beautiful eponymous debut album balancing fragility with raw charm.

Adding to the already packed list of exciting newcomers, we are thrilled to have the excellently named PWR BTTM dropping in on an unsuspecting Larmer Tree audience – turning gender politics into loud, infectiously positive, glorious rock music centred around what it means to be young and queer and confused. Melbourne’s Rolling Blackouts Coastal Fever are poised to take over the airwaves with their charging drums, addictive bass lines and ridiculously catchy melodies. The fact their debut EP came out on Sub Pop says it all! We’re definitely set for a thrilling show. And a thrilling weekend all round!

Tier 4 tickets are now on sale at £189. There are no booking or transaction fees. A deposit scheme allows people to pay £45 now and the balance by 15 June: http://www.endoftheroadfestival.com/tickets