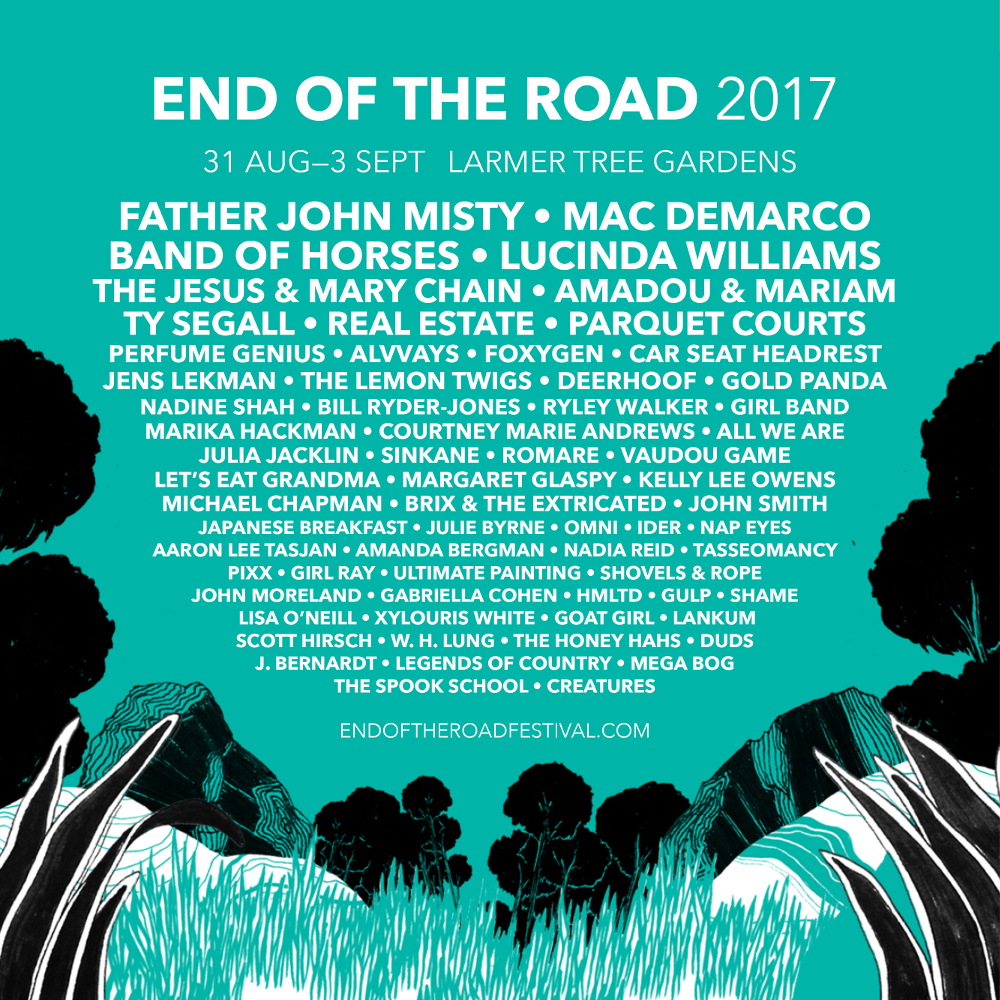 We are so excited to announce the first round of bands for End of The Road 2017!!Father John Misty

Father John Misty will make his first ever UK festival headline appearance at End Of The Road. Since 2012, Joshua Tillman has emerged as a singular and idiosyncratic voice. Whether by virtue of his polarising, witty lyrics, his ‘intimately berzerk’ live performances or the infuriating line he seems to tread between canny and total fraud, Father John Misty has carved out an enigmatic position for himself in the musical landscape. With a new album Pure Comedy, due in April, we can’t wait to see what he has in store for the Woods Stage.

Joining the good Father is firm festival favourite Mac DeMarco, who returns with his delicately demented pop to play his only UK festival this year. Last seen presenting us with our tenth birthday cake on the Garden Stage before staging a full on cake fight, the shambolic, crowd-surfing maverick Mac announced a new album last week and to say we’re excited to have him all to ourselves, is a massive understatement.

We’re honoured that multi-Grammy award winning legend Lucinda Williams will be bringing her pioneering songwriting to Larmer Tree Gardens for the very first time. Following the universally acclaimed 2016 album Ghosts Of Highway 20, End of The Road is the only festival where you will hear her spellbinding songs brought to life, taking in aspects of Americana from Blues and Honky-Tonk, Gospel and Soul to Folk and Rock.

Following Lucinda Williams’ lead will be the Seattle based artist Courtney Marie-Andrews, who counts the likes of Ryan Adams and Damien Jurado among her fans. Julie Byrne’s startlingly beautiful voice will surely bring the festival to a standstill, while acclaimed newcomer and ex Little Big League guitarist Japanese Breakfast brings her blend of dark lyrics and blissed out pop melodies. We are also delighted to have Norwich multi-instrumentalists and purveyors of ‘sludge-pop’ Let’s Eat Grandma, whose alluring strangeness extends to their live show. Dancing, rapping, recorder solos… it’s all there and we can’t wait.

New York via Texas punks Parquet Courts, who provided the soundtrack to our excellent launch video, make their second appearance at End Of The Road following their breathlessly exciting show in 2013. After last year’s brilliant Human Performance – which was more melodic, more personal and angrier than anything they’d done before – we’re in for another treat. Fellow punk and one-man dynamo Ty Segall also returns to see us for the second time, playing utterly joyful rock’n’roll, without the irony but with all the passion. Not one for half measures, his live show is an over-the-top howling assault on the senses that is as gloriously bewildering as it is exciting.

We are very pleased to welcome back the unique Perfume Genius, whose performance in 2014 left us speechless; those already delicate songs, and the not so delicate ones, laid entirely bare. His new album should be revealed soon, and we can’t wait to fall in love all over again. Fellow Seattle based songwriter Car Seat Headrest also joins us with material from recent album Teens Of Denial – a heady distillation of introversion and aggression, vulnerability and playfulness. Live he covers everyone from The Cars to Frank Ocean, as well as ripping through his own original material.

California indie duo Foxygen will play for us at last. Their long awaited new album Hang features contributions from the Flaming Lips’ Steven Drozd, Matthew E. White, the Lemon Twigs and more. Speaking of Lemon Twigs… the ultimate critics pets have gone from playing New York bars to signing a record deal with 4AD within a year, receiving praise from as far and wide as the Zombies to Questlove. They’ve already played with Foxygen and Car Seat Headrest, so we’re happy to keep the gang together at End of The Road 2017.

More acts to be announced soon including our third headliner.