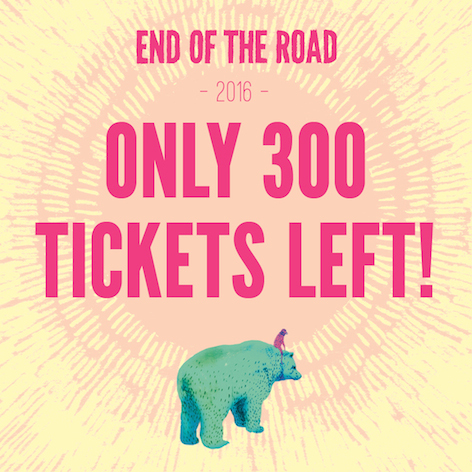 Have you seen the news? We’re down to our last 300 tickets! Don’t miss out, grab your friends, grab your wallet and grab your ticket for End of The Road 2016!

It’s going to be a magical weekend, and not just because of the exceptional headliners – including The Shins‘ first show in four years, the only chance to see the dazzlingly talented Joanna Newsom in the UK this year, the Technicolor genre-hopping Animal Collective and the otherworldly Bat for Lashes – as everyone who has been to End of The Road knows, it’s all about the new discoveries and secret performances. Who will be popping up at the Piano Stage or singing on the Disco Ship? Anything could happen… Including one more headliner still to be announced for the Big Top on Saturday night, who will be revealed on site!

This year for the first time, we welcome cult national treasure Adam Buxton to the festival, who will be recording his much loved ‘ramble chats’ podcast with very special guests to be announced on Saturday. Other one off events include the first in a series of very special pre-release album listening parties for Wilco’s tenth studio album Schmilco, on Saturday morning at the Tipi Stage. The new record will be played on vinyl in full from 11am, before anyone else gets to hear it.

There’s something to please all tastes in the Cinema schedule this year, whether your after an acclaimed documentary such as the visually stunning Mapplethorpe: Look At The Pictures or one of the year’s best independent films Everybody Wants Some!!!, Richard Linklater’s semi-sequel to his 1970s high-school comedy Dazed and Confused. Alternatively if you want to catch up some of 2016’s box office hits, there’s The Jungle Book and Nice Guys, as well as some old hit classics such as E.T., Kes and Being John Malkovich among many others. We also have a very special screenings of the music documentaries The Sad And Beautiful World of Sparklehorse and Invisible Britain: Sleaford Mods, both preceded by Q&As with their directors Bobby Dass and Paul Sng respectively.

Along with our usual stellar selection of Workshops and activities taking place in the Wonder Lands and the ever impressive line up of Food & Drinks on offer, including Beavertown taking over the Courtyard Bar this year, End of The Road is set to be one of the best weekends of 2016. Come join us for the party of the year!