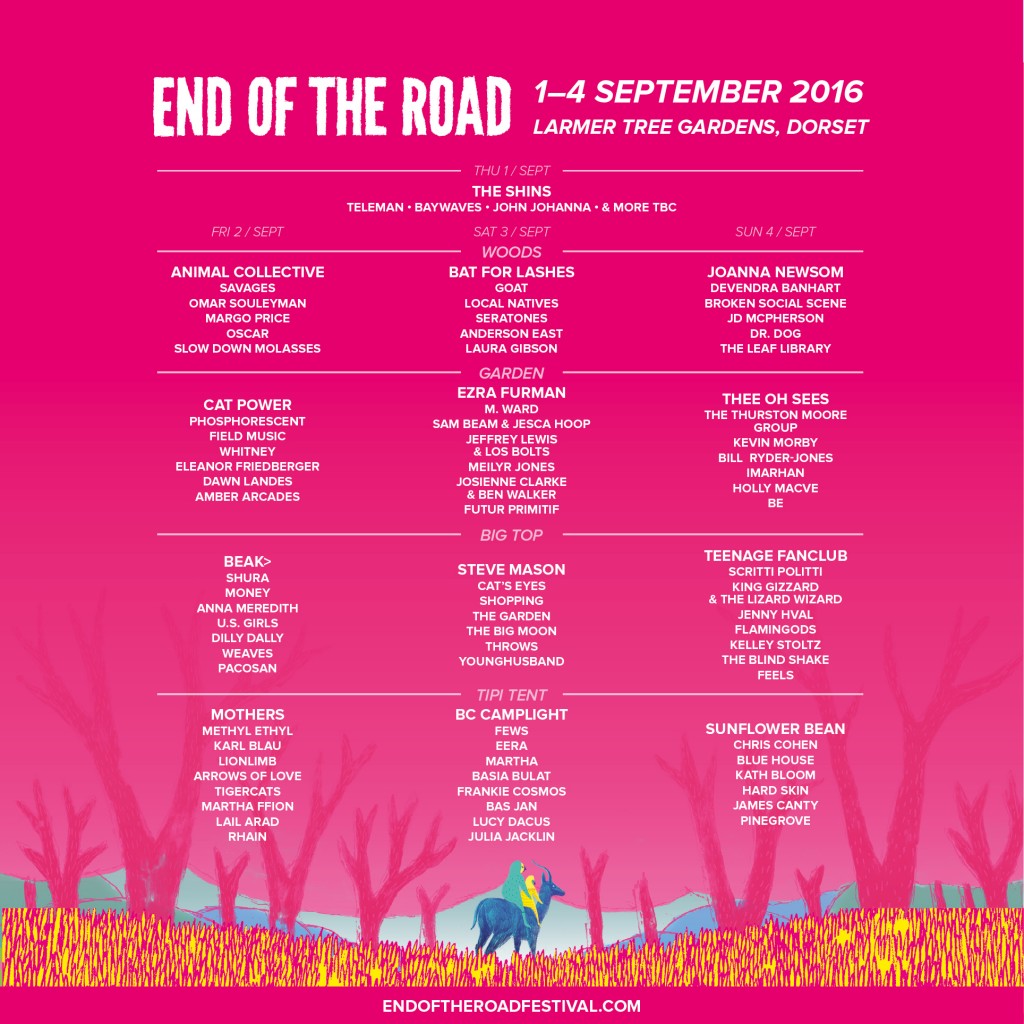 We are delighted to announce the day splits as well as some extra additions to this year’s already extraordinary line up.

The Shins will open the festival and play their first UK show in over four years (their only UK festival in 2016) on The Woods Stage on Thursday night, supported by new line up additions Teleman. Technicolor, genre-hopping, experimental vocal harmonising one-offs Animal Collective will follow on Friday night. Bat for Lashes, who has long been on the festival wish list with her unique brand of otherworldly pop, plays End of The Road for the first time on Saturday while the inimitable Joanna Newsom will close The Woods Stage on Sunday with her harp-led sonic odyssey, playing her only UK festival this year.

Meanwhile Scottish genre-defining alt-rock heroes Teenage Fanclub will close the festival with a late Big Top headline slot on Sunday night (playing after Joanna Newsom), where the likes of Steve Mason and Cat’s Eyes will have lit up the stage the night before. The Garden Stage will see the mercurial and mesmerising singer-songwriter Cat Power play End of The Road for the first time on Friday, followed by one of today’s new additions, the gender and genre defying Ezra Furman, who returns to the festival to headline on Saturday night. The iconic Garden Stage will also play host to John Dwyer’s peerless Thee Oh Sees, rounding off a flawless Sunday night bill after Thurston Moore Group and Kevin Morby.

The Tipi Stage plays host to a wealth of new talent this year with Mothers headlining on Friday and Sunflower Bean headlining on Sunday. We are also delighted to finally welcome BC Camplight to End of The Road, who played our Rough Trade takeover event last month and now headlines the Tipi stage on Saturday. Other Tipi highlights include rising stars Frankie Cosmos on Saturday and Karl Blau on Friday.

In addition to all this, throughout the four days, there will be the usual array of surprise performances, one off collaborations and secret sets – presented in collaboration with The Line of Best Fit – that have become End of The Road’s trademark. Uncut will be returning to host their daytime artist Q&As and there will be a variety of after hours fun and dancing to be had at the Silent Disco, The Disco Ship and Bat for Lashes’ ‘wedding reception’ hosted by Loud & Quiet (with very special guest DJ’s to be announced) after her headline set of The Bride on Saturday.

Details of set times will be released closer to the festival and will be staggered to avoid clashes where possible.