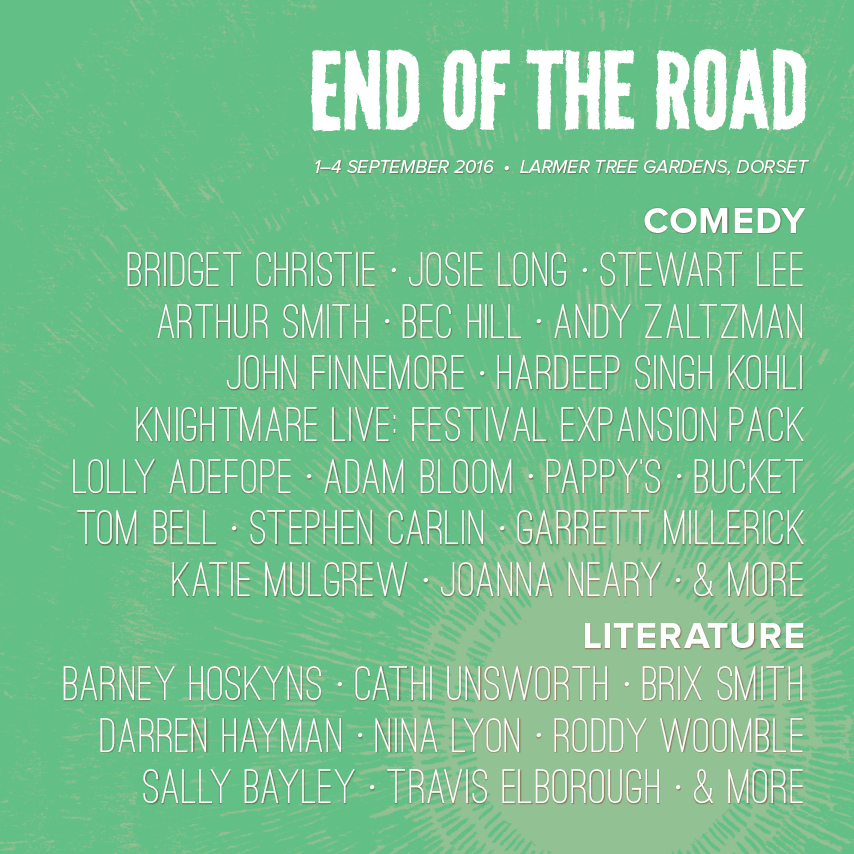 We are delighted to announce this year’s Literary line up, showcasing some of the best of the current crop of acclaimed writers. As usual, during the morning of each day of the festival we will be welcoming a selection of authors to read from and discuss their work at The Library Stage.

We have curated a diverse line up this year that ranges from Brix Smith discussing her turbulent years with The Fall; to Vincent Thurkettle, a woodsman, who will be giving you practical tips on how to light the best log fire. We also have pop-cultural noir novelist Cathi Unsworth reading from her latest acclaimed work Without The Moon; Travis Elborough on the social history of parks; Sally Bayley on the art of diary keeping from Pepys to Tweets; Roddy Woomble on life on Iona and his new almanac of thoughts and ideas; Barney Hoskyns on the bohemian enclave of Woodstock and Hefner’s Darren Hayman on his Thankful Villages.

We are also very excited to share this year’s Comedy Stage line up, boasting one of the strongest and most diverse line-ups of the summer. Joining Stewart Lee on the comedy bill we have a mixture of stand ups, sketch, character, musical comedy and political satire in store for 2016. First up, acclaimed comedian and columnist Bridget Christie. Having won more awards than you can shake a biro at, Christie is a familiar name to many and for good reason. Her breakout show A Bic for Her and follow-up Ungrateful Woman were critically-acclaimed – leading to sold out shows across the country.

Festival favourite Josie Long also makes a long awaited return to the End of The Road, bringing her unique brand of surreal political satire to this year’s comedy line up. As if that wasn’t enough, the inimitable ‘satirist for hire’ Andy Zaltzman will bring his Political Animal show to the festival, including his usual array of guest speakers. Fellow Radio 4 regular and TV writer John Finnemore is best known for airline-based Radio 4 sitcom Cabin Pressure starring Benedict Cumberbatch, radio sketch show John Finnemore’s Souvenir Programme, and will make his debut at the festival with a very special Sunday night featuring an equally special guest.

Comedy Line Up Additions to End of The Road Festival 2016:

Tickets are now on sale at £195. There are no booking or transaction fees. A deposit scheme allows people to pay £45 now and the balance by 15 June: http://www.endoftheroadfestival.com/tickets