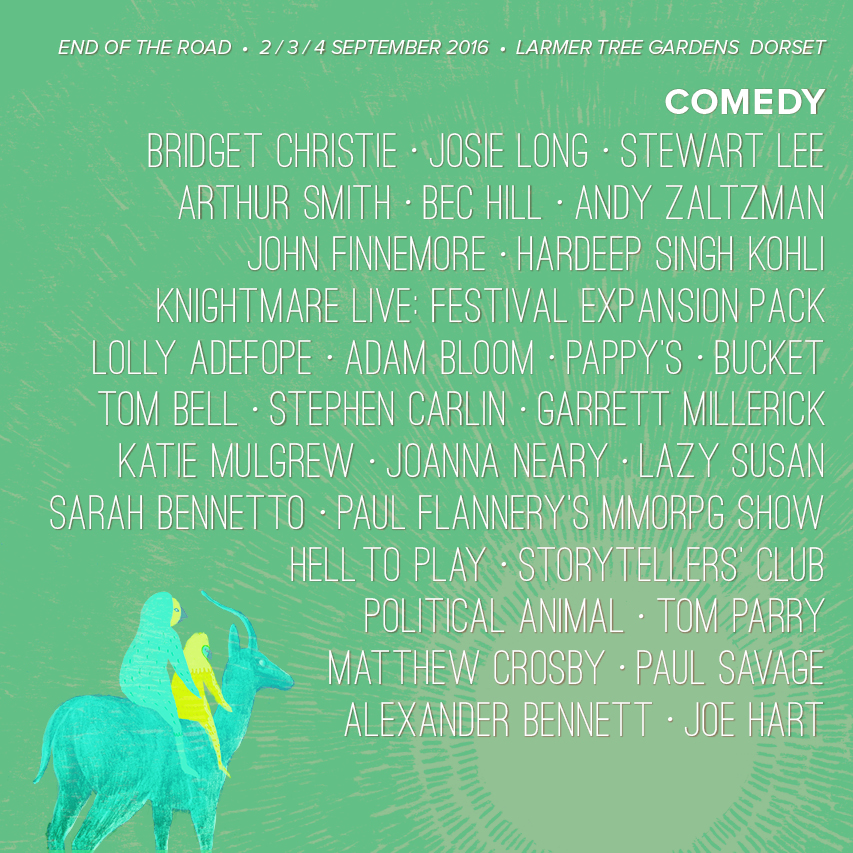 We are thrilled to announce this year’s Comedy Stage. Joining Stewart Lee on the bill we have a mixture of stand ups, sketch, character, musical comedy and political satire in store for 2016.

First up, acclaimed comedian and columnist Bridget Christie. Having won more awards than you can shake a biro at, Christie is a familiar name to many and for good reason. Her breakout show A Bic for Her and follow-up Ungrateful Woman were critically-acclaimed – leading to sold out shows across the country. Her series Bridget Christie Minds the Gap has just completed a successful second run on Radio 4.

Joining Christie is festival favourite Josie Long, who will bring her unique brand of surreal political satire to this year’s comedy line up. Fresh from the launch of her new Radio 4 sitcom Romance And Adventure, about a woman moving to Glasgow and trying to make friends, Long makes a long awaited return.

As if that wasn’t enough, the inimitable ‘satirist for hire’ Andy Zaltzman will bring his Political Animal show to the festival, including his usual array of guest speakers. Fellow Radio 4 regular and TV writer John Finnemore is best known for airline-based Radio 4 sitcom Cabin Pressure starring Benedict Cumberbatch, radio sketch show John Finnemore’s Souvenir Programme, and frequent stand out performances on The Now Show. The comedian will make his debut at the festival with a very special Sunday night featuring an equally special guest.

Other highlights include the legendary comedian and Comedy Club host Arthur Smith, along with comedy writer turned celebrity Masterchef Hardeep Singh Kohli who makes his first appearance at the festival. Hugely respected amongst comics, and wildly popular, Adam Bloom brings his super-high energy delivery and frenetic approach to nailing an unfathomably high laugh count provides an exhilarating experience for both Bloom and audiences alike.

We are also delighted to welcome back Knightmare Live: The Festival Expansion Pack, the over-the-top and very funny stage adaption of the cult kids TV series starring Paul Flannery, Tom Bell (who recently  played an alien in the new Star Wars) and James Rowland. Following critically-acclaimed Edinburgh Fringe runs, a national tour, and a recent West End debut, join familiar characters like Treguard and Lord Fear in what will no doubt be an even more imaginative and ramshackle late night show.

Tickets are now on sale at £195. There are no booking or transaction fees. A deposit scheme allows people to pay £45 now and the balance by 15 June: http://www.endoftheroadfestival.com/tickets